Royal Commemoration Lodge 1585 has been running since 1875 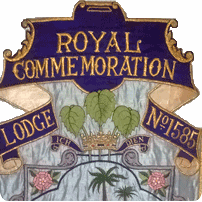 As can be confirmed in Lane's Masonic Records, Royal Commemoration Lodge 1585 received its warrant of constitution in 1875 and was fully founded on Monday, 2nd March 1876 by J. W. Robinson and seven other inhabitants of Putney, to fill the gap in the Putney area caused by the relocation of the William Preston Lodge No. 766 from Putney to elsewhere. In 2025 it will therefore celebrate 150 years as a lodge, so its brethren are part of a lodge with a rich and long history.

Its original meeting place was the Star and Garter Hotel in Putney after the relocation of the William Preston Lodge 766 away from Putney, and has met at a number of locations in London since. Currently it holds its lodge meetings at Freemasons' Hall in Holborn, with dining afterwards varying in location, most recently at the Grand Connaught Rooms.

The name was inspired by the return of H.R.H. Prince of Wales to his native land after a successful tour of India. Upon his return to this country he was duly installed the most Worshipful Grand Master of the United Grand Lodge of England. These two events Gave to the founders the inspiration to name the new Lodge, Royal Commemoration.